Flying around the world takes on a whole new meaning when you are moving to Asia from the middle of America with an 18 month old.  This picture from our first flight sums it up pretty well.

Honestly the layovers were the worst part of all of it.  We spent 7 hours in the LAX International terminal.  It  was the worst part of the trip.  Thankfully there was a great children’s area for B to play in, that he mainly had to himself.  LAX is a decent enough airport, lots of high end shops.  I had a very LA burger with truffle aoli on it.  Looked around Hermes and Gucci then up to the lounge to people watch.

We had to leave the lounge when sleeping B woke up MAD.   Thankfully I was able to get B to sleep before we boarded our flight, and he spent the first 6 or so hours of it just like this:

I have to take a little space here to talk up the Asian airlines at this point.  America based airlines could learn a few things.  We flew United to LAX we asked if we could pre-board the response was I guess I will let you board early.  Sigh….inconvenience…..sigh.   When we got to the Cathay Pacific gate, we went to check in so we could gate check our stroller the difference in customer service was AMAZING. Not only did they arrange for us to pre-board, they saw an issue with the way our bags were entered in the system and fixed that for us.    We were the first people on the plane so we had plenty of time to get settled.  We arranged before our flight to get B a fruit plate to eat for meals.  They came and checked with us before hand to verify it.  Since B was a sleep they held it for us until he woke up.  They brought it to us when he woke up, filled his sippy cup with milk.  It was really pretty great.

When we got to Hong Kong we had to go through security for a third time.  Hey America, we didn’t have to take off our shoes!!  Anyway they have a special line for those of us with a need of special assistance.  B cried, that got us through super quick!  Thankfully we had the foresight to purchase an airport lounge access membership before we left the states.  These lounges have showers, free drinks and food and comfortable places to sit and relax.  That might the best shower I have ever taken in a public place (not that that happens often, but still the best!)  B quite enjoyed the pastries that were available. 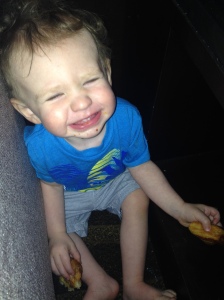 After 8 brutal hours in Hong Kong we finally were able to board our flight to Penang.  B had a total meltdown as we were preparing for take off.  Once we were in the air he got another fruit plate and the Ipad loaded with The Mickey Mouse Club House, all was once again right with the world.

When we finally landed B was asleep.  He slept through immigration, customs, a car mix up at the airport, the ride to the hotel.  He woke up briefly to terrify the other hotel guests with ear splitting screams as we checked in and a diaper change.  He promptly fell back asleep and didn’t wake up until 4am.  We were up early, but were greeted with a beautiful Sunrise.