So here we are one year later in Penang.  We have decided for a number of reasons to not renew Nathan’s contract another year, so it looks like we will be here for just one more year.  We will be making the most of the next year just as we have the last one by traveling as much as is feasible. I want to make the most of our time here for sure, I am looking forward to some once in a lifetime trips we are planning over the next 12 months.

I am looking at the next year with mixed feelings there are things we will miss, most especially B’s school, but we are also really looking forward to going home and getting settled back in Austin. We are really fortunate to live in a great city that has much to offer, I miss it a lot, I also miss having my own house, and I miss the dog like crazy. Sometimes living here feels like a vacation that has lasted just a little long .  You know the one where you get to the end of the trip and say that was fantastic, but now it’s time to go home and sleep in my own bed.  Only it doesn’t end and my bed is in a storage crate somewhere in a warehouse between Austin and Houston. It’s weird to me that I actually have no idea where my stuff is.

One thing that we have learned about living in Penang, is that it is a destination for people all over Southeast Asia.  When there is a major holiday happening Penang gets very, very busy. The exception to this is Chinese New Year, when everything closes.  Either way it is best for us to take advantage of the extra vacation for Nathan and get out of town.  In July Nathan had two days off for Hari Raya, which is the end of Ramadan and then one more day for the Governor’s Birthday.  So we decided to take advantage of it and headed to Singapore for a short holiday.

Singapore is a big first world city.  There is a chicness to it, that you don’t find in other Southeast Asian cities.  It is just south of Malaysia, the flight is only about an hour and a half at the most, so it is a super easy trip to make.  When Britain left Malaysia in the 1960s Singapore was actually part of the original unification that created Malaya.  Two years later once the dust settled, the predominantly Chinese state of Singapore and Malaya parted ways because of differing  visions for the future.  At that point Malaysia was formed with its current borders and Singapore became it’s own governed city state.

Singapore is a very small but very financially successful country.  It is the financial center of Southeast Asia.  It is also known for having a fairly transparent, non-corrupt government, and exercising a great deal of control over it’s citizens.  You can get fined for pretty much anything in Singapore.  I would not litter or smoke in the wrong spot if I were you.  We saw all kinds of jokes about this while were there.  The recurring one was Singapore is a Fine city, then outline all the things you can get fined for.  The flip side of this is Singapore is a beautiful, amazingly clean, well working city.  I seriously have never seen a metro system as shiny and clean as the one in Singapore.

We stayed in a little boutique hotel on the edge of Chinatown. It was small, but comfortable and clean. This was great location because it was in walking distance of a lot of good food and souvenir shopping in Chinatown. The only downside is that there is no pool. In a hot climate like Singapore an afternoon swim is very much welcome. That is probably the only reason we wouldn’t stay here again. It was a charming hotel!

There are three or four streets in Chinatown that are closed to cars.  You can find all kinds of cheap souvenirs and tasty treats here.  They have preserved a lot of the shop houses that used to be all over the city.  Many have been torn down to create the big city that Singapore is.  This part of town is a heritage section that has preserved the look of old Singapore.

There are a couple of really neat temples on the edge of Chinatown, one is the Buddha Tooth Relic Temple. 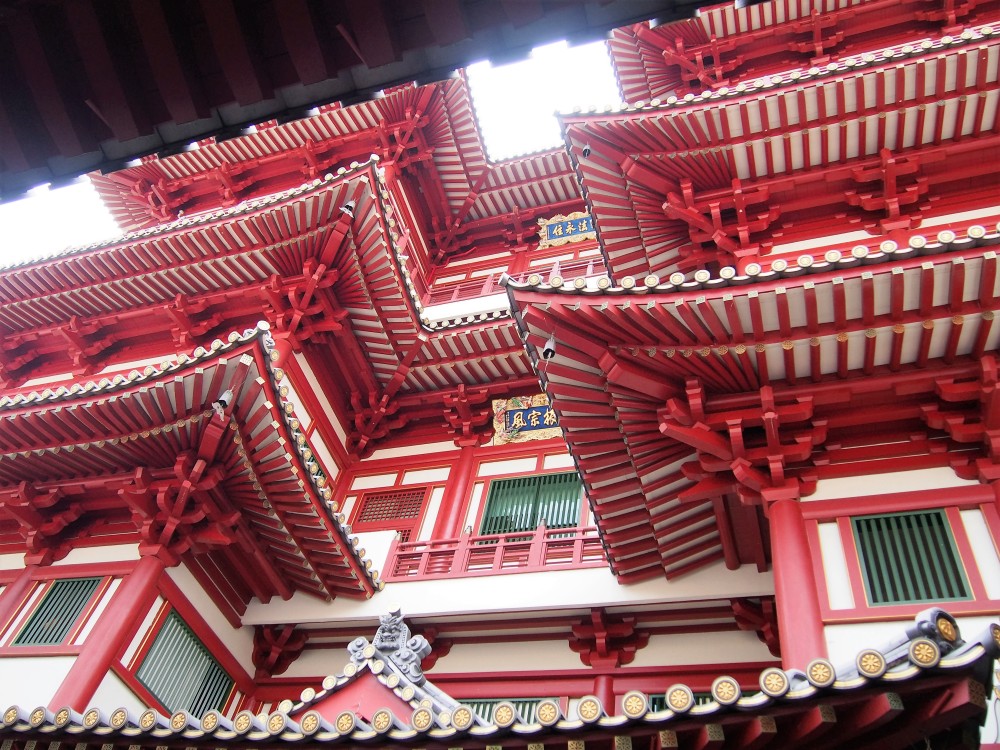 Singapore is known as a food destination. This wasn’t something we went out of our way to discover because the shared heritage of Malaysia a lot of the street food is very similar to what we have in Penang (which is a foodie destination too). We ate in Chinatown a couple of evenings and it was tasty, but not that different from what we get here in Penang. We did make a trip the Maxwell Food Hawker Center which is a famous one here. They are famous for their chicken rice vendors. Chicken rice is simple dish of roasted chicken and rice with a soy sauce type sauce. It can be really good or it can be fairly boring.  It was really good at Maxwell.

Over the last year we have become accustomed to traveling with a toddler. It can be difficult at times, we don’t stay out nearly as late as we normally would on a vacation, we have to break in the afternoon for a rest. In a climate like Malaysia or Singapore the afternoon break can actually be pretty welcome. The other thing that we have noticed about traveling with a kid is that you go see and do things that you wouldn’t have necessarily done. This almost always includes a zoo or aquarium or both.  Things that we probably wouldn’t have done on a holiday before kido. Turns out this is not a sacrifice for us. Zoos and aquariums are a lot of fun!!

Singapore has a really nice zoo complex which is about a 20 minute cab ride out of the city center, none of the trains run out that far yet. I have a feeling that will change eventually until then there is Uber. They have 3 different parks, a zoo, one called River Safari that focuses on river and freshwater habitats and a Night Safari. The Night Safari doesn’t open until 6, since it is a night time park, as the name implies. We opted to skip it and just do the Zoo and the River Safari. We were not disappointed, it is a really nice zoo complex.

At various times throughout the day for a fairly small fee (I think it was 5 SD) you can get up close and feed some of the animals.

The River Safari was as fun as the main Zoo. It had tons of fresh water fish tanks. It has a river ride that looked neat but B was too little for it still.  The best parts of the River Safari were the Manatee tank and the Pandas.

We spent the second day of our holiday at the Gardens By the Bay. This where you will find the famous Marina Bay Sands resort. They have a famous infinity pool at the top of the hotel. It is of course only for hotel guests, we looked into staying here for one night just to swim in the famous pool. In the end we just couldn’t justify it $$$$.

Marina Bay Sands is right next to the Gardens By the Bay. There are tons of walking trails and things to do there. It is home to the Flower Dome and the Cloud Forest Dome which is what we decided to do. It was a pretty rainy morning so we did not get a chance to explore as much of the gardens as we would have liked but what we did see was pretty great.

The Flower Dome and the Cloud Forest are right next to each other. The Flower Dome is a huge indoor botanical garden.  It is beautifully cool and dry inside, and has flora from all over the world. They were doing a special Lily exhibit when were there so it also smelled amazing in there. There are also some really beautiful sculptures incorporated in with the flowers.

Right next d0or to the Flower Dome is the Cloud Forest.  This is an example of forest ecosystems at high elevations. They will make it “rain” inside certain times of the day to show how mist can form at the top of the forest. Unfortunately we missed this, but it was still pretty neat.  You get to climb (or take the elevator) up the middle of the mountain to the top so see what a cloud forest would feel like at the top. There are lots of interesting plants and sculptures to look at here.

On our final day in Singapore we decided to head over to Sentosa Island. This is where a lot of the attractions are. Universal Studios, a giant water park and what we were interested in The S.E.A. Aquarium. We really had no idea just how much there is to do out there. I think if we decide to take another small holiday to Singapore (which we probably will since flights are really cheap from Penang) we will stay out there.

B loves an aquarium (as do I!) so that is what we went with. The S.E.A. Aquarium is great.  It has some really neat tanks. A shark tunnel or two and seriously the biggest sea life tank I have ever seen. If you are feeling really adventurous ($$$$) you can rent a room at the neighboring hotel in which it’s windows look into this massive tank. 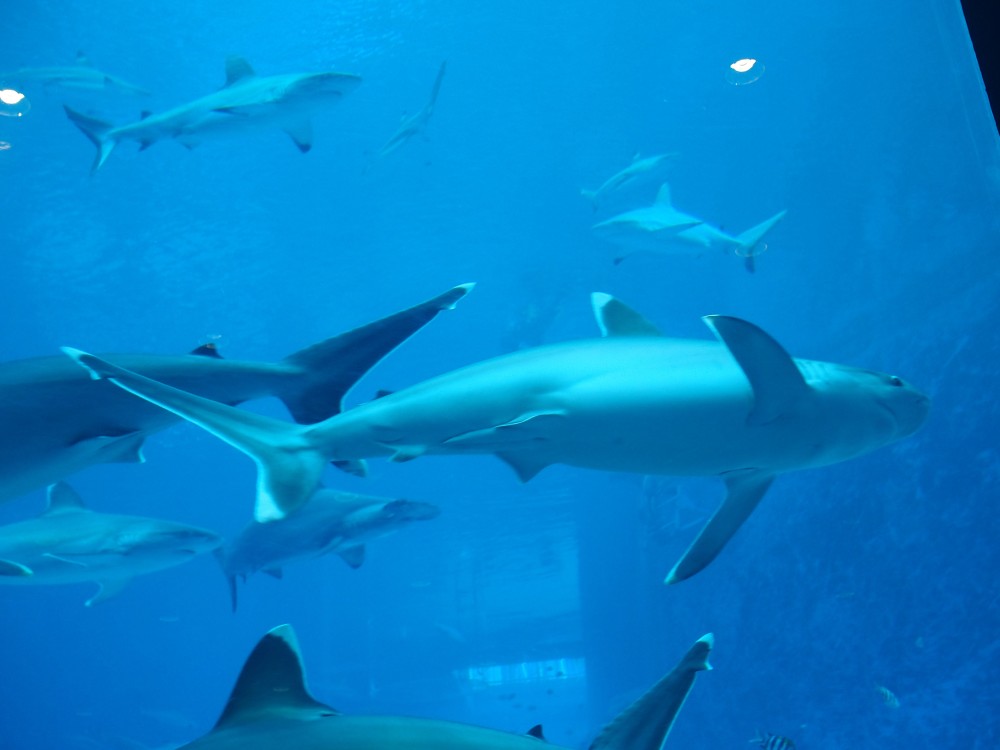 We finished our short visit to Singapore with dinner at a local burrito place. Can I tell you how satisfying this was? We come from the land of Tex-Mex, it is hard to find in other parts in the US much less in Asia. Aside from a turkey sandwich and a really good burger this is probably the food I miss the most. B had super yummy quesadilla and Nathan and I both got burritos mine chicken his asado both with extra guac. Oh Guacamole how I have missed you so………The salsa was decent too.

It was a truly divine way to end a great holiday!