I am long overdue writing about our 2nd Christmas here in Malaysia. How is it already the end of March?!?!? I started this post months ago, but for some reason it did not get saved (user error more than likely) so I had start from scratch. I have just not had the time to start over before now. That is certainly not a bad thing, for me being occupied is a good thing.  We had a long stretch of boring from summer into fall, where not a whole lot was going on, things definitely picked up once we got to November.

We will be wrapping up our time here very shortly, so my goal is to get some major blogging done before we begin our preparations for moving back across the world. My main purpose in this blog is a way to keep a record for B so he can see where he has been, and for our families to keep up with him. Thanks for being interested and coming on this journey with us.  Now onto Christmas!

I have mentioned before that I did not enjoy our first holiday season here in Penang.  It just wasn’t very Christmassy.  I tried, but it just didn’t feel right from Thanksgiving on.  So I decided I was going to change that this year.  The first thing I decided to do was host an expat Thanksgiving Potluck Dinner.  This was insane considering the functionality of my kitchen, but it worked out great.  We had 5 families over, only one other being from the US. I felt a whole lot of pressure to get the turkey and dressing right since most of our guests had never had it before.  Thankfully it turned out really well! I was really proud of myself since it was the first time I had ever made a turkey.

The second thing I did this year was get an artifical Christmas tree.  For some reason the Malaysian Government decided to outlaw the import of all Christmas Trees this year.  I am sure it has to do with some foreign bug coming in the country or something, but never the less there was not a real tree to be found. This was not actually a bad thing, because our real tree was so bad last year it had me in tears. At least this one looked like a Christmas tree. It turned out beautifully, and now I have a second tree to decorate next year at home (yeah we are going to be “that” house, but I will love every second of it).

The third thing we decided to make Christmas better this year was not be in Malaysia. Nathan only really had a week’s worth of vacation so going back the US was really not an option.  We decided that the jet lag combined with all the family and friends we wanted to fit in a single week was not going to be a good idea with B.  As much as we wanted to see everyone and be home for, it would have been meltdown city, for all of us. That wouldn’t have been good for anyone. When we got the opportunity to go to Switzerland and spend the holidays with my cousin and her husband so we jumped on it.  Talk about Christmassy, there is nothing more Christmas than spending it in Europe!!! Also it was really nice to spend it with family.

I put in a special request with Santa, he agreed to come the weekend before since we would be traveling. That also was a huge success!

Then off we went to Europe.  We took an overnight flight to Zurich and landed at 6am on December 23rd. Now I have to take a second to do an unsolicited product endorsement here. We ordered B a Jetkid rolling suitcase. It is the best kid travel accessory ever in the history of traveling with small kids. Not only can he ride on it through the airport so we could check his stroller, it turns the airline seat into a bed. We knew we would be doing at least 3 longish to really long flights in the next 6 months so we had to do something. This thing is amazing. He slept for pretty much the entirety of both flights to and from Europe and on our red eye to Sydney last month.

This thing is fantastic. http://jet-kids.com/

Now on to Zurich!

We had such a fabulous time in Europe. It was so good to see my cousin and spend Christmas with them.  It was a trip that did us all some good.  The weather was delightfully cold, we went to the Christmas markets, explored Zurich and some little towns that are situated on Lake Zurich, and took a quick trip into the Alps for lunch at a ski resort.

The Christmas Markets were exactly the kind of Christmas I was looking forward. I am not sure you can get more Christmassy.  We hit our first one in the evening  after a lovely day of exploring some little towns closer to where Ellen lives. We took a boat across the lake into Zurich (which B loved) to the main outside market right in the center of town.

The next day we to the train back into Zurich and got to walk around the city for a bit. One of the best parts was the main train station.  It has a market inside, we were able to pick out some really neat ornaments and decorations to take home with us. Also sausage, bread and pretzels, that is all I really need to say about that.

Ellen, Logan, and Gladys live in Staffa, which is situated on Lake Zurich. They both commute into Zurich via the train to work each morning. Staffa is a quaint little town with a nice view of the lake and pretty vineyards to walk through. We had such a relaxing Christmas Eve and Day. After our sightseeing Logan made an amazing Turkey dinner, which we made the best of next day (turkey sandwiches!!!!). We took a lovely walk through town down to the lake on Christmas Day. It was a really nice way to spend Christmas.

On our final day in Switzerland we took the train to the Alps, and a Gondola up the mountain to have lunch at a ski resort. The Alps are an amazing sight to see, they almost don’t look real. They had not had much snow yet, but it was still a pretty spectacular way to eat lunch.

This was our view for lunch. 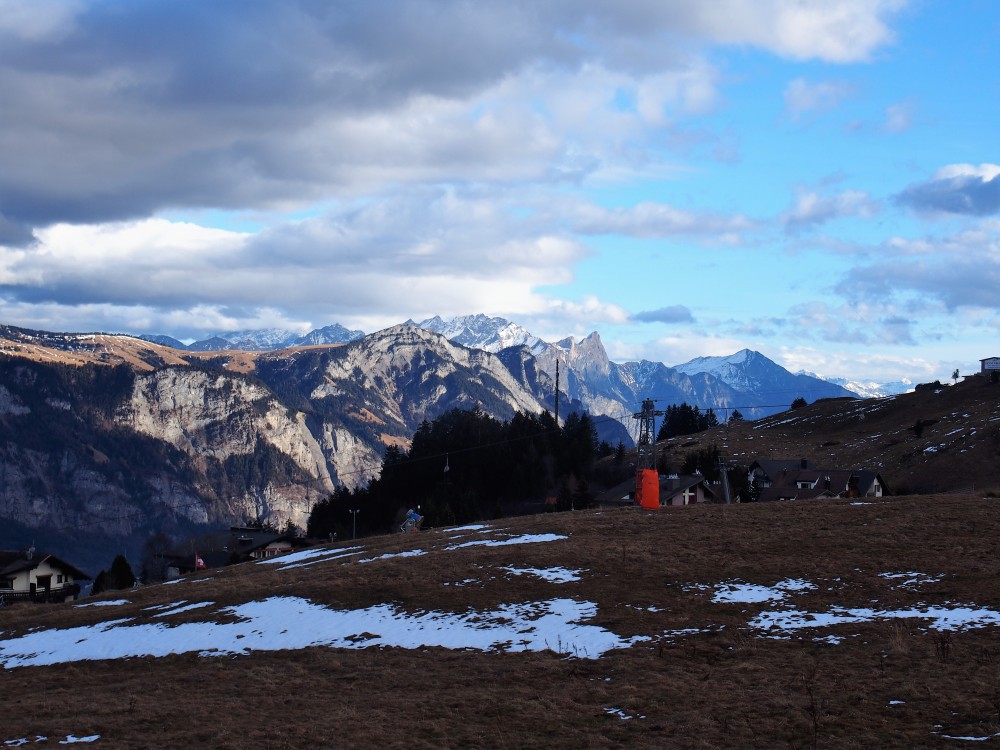 We really enjoyed our short stay in Zurich. Switzerland is beautiful and spending Christmas with family was so nice!  On the 27th, we went set out on phase 2 of our European Christmas/New Year – Prague.